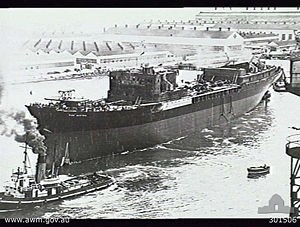 HMAS Supply (AO-195) (formerly RFA Tide Austral (A99)) was a Tide class replenishment oiler laid down by Harland and Wolff Limited at Belfast in Northern Ireland on 5 August 1952, and launched on 1 September 1954.

She was initially operated by the British Admiralty with a civilian crew as the Royal Fleet Auxiliary (RFA) Tide Austral. In 1962, the ship was purchased by Australia and commissioned into the Royal Australian Navy on 15 August 1962, under her original name. She was renamed HMAS Supply on 7 September 1962.  Complement: 90.

During her Australian service, Supply, accompanied initially by Royal New Zealand Navy (RNZN) frigate HMNZS Otago and later by RNZN frigate HMNZS Canterbury, sailed to Moruroa Atoll in official protest of the French Canopus atmospheric nuclear test. Supply was part of the relief force sent to Darwin following the destruction caused by Cyclone Tracy in 1974. In 1975, Supply was present for the proclamation of Papau New Guinea’s independence from Australia, and later for the bicentennial of America’s independence from Britain.

HMAS Supply paid off on 16 December 1985, and was replaced by HMAS Success.