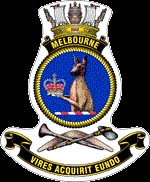 Melbourne was the lead ship of the Royal Australian Navy’s Majestic class aircraft carriers.
Her keel was laid in 1943 by Vickers Armstrong, and she was launched as HMS Majestic in 1945. At the end of World War Two work was suspended on the ship until she was bought by the RAN in 1947.
With the extensive work to incorpurate the latest aircraft carrier technology she was not commissioned until 1955.
Melbourne was not involved in a combat role, however she did collide twice and sink other vessels, HMAS Voyager and USS Frank E.Evans.
She was decommissioned in 1982, and sent for scrapping in 1985. She was not allowed to rest and the Chinese used her for experiments in carrier flight operations.
She was finally broken up in 2002.