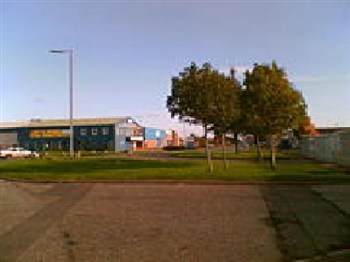 RAF Carlisle (previously RAF Kingstown) was a Royal Air Force establishment, now closed after being used for a variety of roles over a period of fifty eight years and formerly located 2 miles (3.5 kilometres) north of Carlisle city centre in Cumbria, England.

The station was latterly the home of No. 14 Maintenance Unit and occupied the various sites originally used by RAF Kingstown’s Elementary Flying Training School during World War II. The site was usually known both locally and within the RAF by its shortened form of 14 MU. The site had also served for a short period in the 1930s as a civilian Municipal Airport for the City of Carlisle, but proved to be underused and uneconomic.

The maintenance unit was located on the northern edge of Carlisle, just past the present Asda supermarket, and spread across several different sites. The smallest storage site of Harker was 0.7 km north east of RAF Kingstown and, together with Heathlands which was 0.5 km north, was on the opposite side on the A74. The largest site of Rockcliffe was 1.2 km north west and Cargo site was 1.5 km south west. The maintenance unit was used by the RAF to store and maintain various pieces of equipment ranging from aircraft engine parts to firearms, ammunition to office furniture, aircrew clothing and small hardware items.

Routine requests for items were dealt with by the (mostly civilian) warehousemen during normal working hours. At night a uniformed RAF Duty Officer dealt with urgent and essential "flash" requests from operational flying stations.