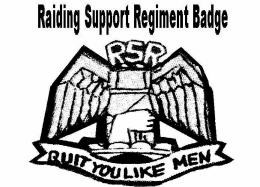 The Raiding Support Regiment was one of the many special service units formed during the Second World War. This particular unit was formed in North Africa in 1942 and was actually an offshoot of another special service unit, the "Special Air Service". The object of this regiment was to provide partisan elements with supporting and comparatively heavily armed units. In its early days the regiment was used mainly as raiding forces at the time of desert warfare. Its real history as an independent unit actually started after the Allied Armies had landed in Italy.

The personnel of the unit were entirely volunteers. These volunteers were drawn from many varied allied nationals. The bulk of the unit being made up of Rhodesians, South Africans and British. As a matter of interest, the regiment was adopted by the City of Johannesburg in 1943. Its C.O. was a South African and the second in command a Rhodesian. The Raiding Support Regiment consisted of four squadrons and a regimental head-quarters. These squadrons were armed with different supporting weapons. "A" squadron armament consisted of .50 Vickers heavy machine guns. These guns were mounted on jeeps. "B" squadron was armed with three inch mortars and "C" squadron with anti-tank guns. "D" squadron; and of this squadron I was a member, and although this article pur-ports to be a history of the Raiding Support Regiment, it is in effect a history of "D" squadron, of the Regiment; was armed with 75 millimetre gun Howitzers and it consisted of three, four gun batteries. The 75 millimetre gun Howitzer was chosen because of its adaptability in mountain war-fare and the fact that it could be broken down into several readily assembled pieces which could be dropped from aircraft by parachute cannisters.

The Raiding Support Regiment was a part of the Second Special Service Brigade. This was a composite brigade, other units belonging to it were the 111th Field Artillery Battery, they were armed with 25 pounders, an anti-aircraft Battery with 3.7 anti-aircraft guns. However, these guns were used solely as field artillery and anti-tank weapons. In the brigade there was also a Mountain Battalion of Highland Light Infantry and several other small special service units.

Owing to the independent nature of these organizations, the brigade never did operate as a complete army unit. As a matter of fact, the Raiding Support Regiment never operated as a combined unit but rather as independent batteries being used wherever the need arose. The cap badge of the Raiding Support Regiment depicts a winged gauntlet drawing a hand from a castellated structure. The castellated structure signifies occupied countries, the small hand signifies the occupants of those countries and the winged gauntlet is of course the Raiding Support Regiment bringing a relief to the inhabitants. When the regiment was first formed, this badge was worn on a rather distinctive chocolate coloured beret. However, as the war progressed, chocolate coloured berets were hard to come by and so this was changed to a beige colour. The motto of the unit which surrounds the cap badge is a Bible quotation, "Quit you like men". The headquarters of the regiment were established at Bari in Southern Italy. This area was also used as a rest camp for the different units or the brigade as they returned from their various endeavours in occupied countries. The squadron headquarters was on the Island of Viz, one of the Dalmatian group, lying off the Yugoslav coast. The Island of Viz was completely under Yugoslav Partisan control. Marshall Tito had his personal headquarters on this island for a time.