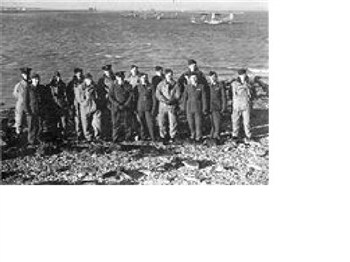 RAF Calshot was initially a seaplane and flying boat station, and latterly an RAF marine craft maintenance and training unit. It was located at the end of Calshot Spit in Southampton Water, Hampshire, England, at grid reference SU487024. It was the main seaplane/flying boat development and training unit in the UK, with the landing area sheltered by the mainland, to the west, north and east, and the Isle of Wight, a few miles away to the south on the other side of the Solent. It closed in 1961.

The station was originally established on 29 March 1913 by the Royal Flying Corps (RFC), as the Calshot Naval Air Station, for the purpose of testing seaplanes for the RFC Naval wing. The station was taken over by the Royal Naval Air Service (RNAS) during the First World War and finally became a Royal Air Force station on the merger of the RNAS and the RFC on 1 April 1918

The long winter walks down the Spit road from the Domestic Site to the Technical Site (no short cuts allowed through the Bomb Disposal Area), to be met half way down by WO (Dolly) Gray with a selection of shovels from which he would `invite` us to contribute toward clearing the shingle, blown by the gale force winds, blocking the road. By the time we got to work we were suffering from hypothermia and frostbite. I think that`s when I decided to remuster to the Clerical Branch - as it was warmer in the SHQ.
The Warsash Ferry; the name given to the RAF Launch detailed to daily collect and return Living Out personnel to work from that area of Portsmouth. I believe it ran aground on a few occassions (much to the delight of those travelling to work) and had to be embarrassingly towed off, appropriately, by another RAF Rescue Launch. We used to have some great laughs as the crews argued over whose navigating had let them down.