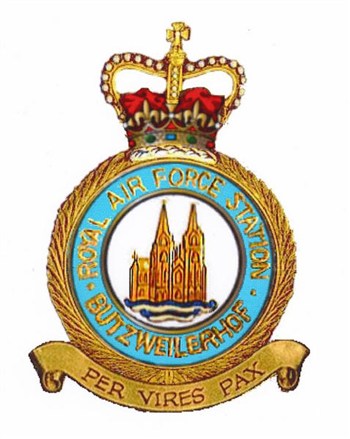 he former Royal Air Force Station Butzweilerhof, commonly known as RAF Butzweilerhof was a Royal Air Force airbase in Germany situated in the northern suburbs of Cologne (Koln). The stations’ motto was Per Vires Pax, and the station crest depicts the Cologne cathedral rising above the waters.


Butzweilerhof was originally the main civil airport for Koln, but was taken over by the RAF sometime during August 1951. RAF aircraft ceased flying in 1965, and the RAF formally left Butzweilerhof, closing down the station on 27 January 1967. The few civilian employees remaining at the beginning of 1967 were required to leave by the end of the month of January, and on 31 January 1967, Butzweilerhof airfield was officially handed over to the Bundeswehr.

In 1960 it was the base for 5 Signals Wing, The Band of RAF Germany and 420 Recovery & Salvage Squadron.

I served there with 537 S.U.a smashing camp,went into Cologne whenever I could with pals "Tug" Wilson & Bob Richardson.it being only a tram ride away,rarely do I the homeward trip the Conductor many times threw us off.Happy days.