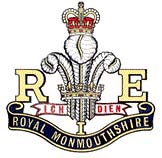 The Royal Monmouthshire Royal Engineers (Militia) (R MON RE(M)) is the most senior regiment in the British Territorial Army, having given continuous loyal service to the crown since 1539. It is part of the reserve forces.

It is not the oldest regiment in the British Army; this honour goes to the Honourable Artillery Company (from 1296 but chartered in 1537), but Militia always takes precedence over Volunteers, although The Jersey Field Squadron (M) can trace its origins back to 1337.

The regiment is also unusual in having the word Royal appear twice in its name. It gained the first "Royal" in 1804 when it was known as the Monmouth and Brecon Militia. The second was acquired in 1877 when the regiment transferred into a Special Reserve section of the expanding Royal Engineers. The regiment is also the only Royal Engineer regiment to possess colours because in 1914 they were given the colours of the East Monmouth Militia for safekeeping.

The regiment is headquartered at Monmouth Castle in Monmouth but has sub-units in Cwmbran, Cardiff, Bristol, Swansea, Birmingham and Jersey.