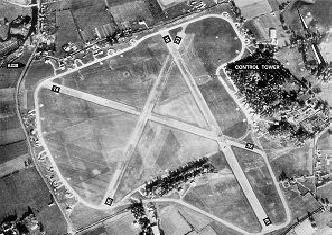 RAF Ibsley is a former World War II-era RAF station and airfield in England. The field is located 2 miles N of Ringwood in Hampshire.

Ibsley airfield was the first of the airfields built in the Avon valley of Hampshire and the only fighter station in the area to have asphalt-surfaced runways. It was originally surveyed before the war but passed over until approved as a satellite and forward base for RAF Middle Wallop during 1940.


The airfield was opened in February 1941 and was used by the Royal Air Force and United States Army Air Force Eighth and Ninth Air Forces. It was also known as USAAF Station 347, Station Code: IB.