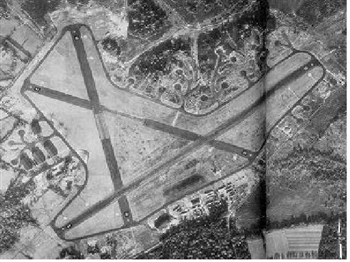 RAF Holmsley South was a World War II airfield in England located near the small village of Holmsley in Hampshire. During the war it was used by the Royal Air Force and the United States Army Air Force Ninth Air Force as USAAF station 455.

During the late 1930s, the suitability of the land near Holmsley, west of the A35 had been noted, but it was not until 1942 that construction of an airfield to Class A standards commenced.


RAF Use
As with nearby RAF Beaulieu, as soon as the runways, perimeter track and basic control and refuelling facilities were available, RAF Coastal Command moved in. In the case of RAF Holmsley South. the first aircraft to operate from its runways were the B-24 Liberators of the USAAF’s 93rd Bombardment Group, transferred from RAF Alconbury, which were enlisted to help with the necessity of reducing U-Boat activity in the Bay of Biscay prior to Operation Torch, the North African landings.

At the same time in October 1942 No. 547 Squadron, RAF. was formed at the station to operate Vickers Wellington in the anti-shipping role. Nos. 58 and 502 Squadrons with Handley Page Halifaxes soon took over the airfield and the task, remaining until December 1943 when Holmsley was required for units involved in the Cross-Channel invasion planned for the following spring. Canadian Supermarine Spitfire squadrons replaced by Hawker Typhoon squadrons were the occupants before D-Day and, when they moved to the Continent, North American P-51 Mustangs arrived.