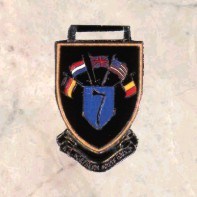 During the Cold War, integration of NATO land forces in the Central Region was effected at the national corps level by two Army Groups: Northern Army Group (NORTHAG) and Central Army Group (CENTAG). These two Principal Subordinate Commanders (PSCs) had only limited peacetime authorities, and issues such as training, doctrine, logistics, rules of engagement (ROE), etc., were largely a national, rather than Alliance, responsibility.
The military system of the North Atlantic Treaty Organization today is fundamentally different from the system that existed before the end of the Cold War. In November 1991, the NATO heads of state and government adopted the "New Strategic Concept" at the NATO Summit in Rome. This new conceptual orientation led among other things, to fundamental changes both in the force and integrated command structure. Two elements of AFCENT (Allied Forces Central Europe) -- CENTAG (Army Group, Central Europe) and NORTHAG (Northern Army Group, Central Europe) -- were dismantled. from the British Army On The Rhine (BAOR)

Ground operations relating to the crisis in former Yugoslavia began in late 1992. In November 1992, the UN Protection Force in Bosnia-Herzegovina was provided with an operational headquarters drawn from NATO’s Northern Army Group (NORTHAG), including a staff of some 100 personnel, equipment, supplies and initial financial support.