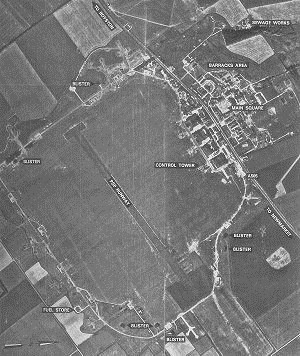 Duxford airfield dates to 1918 when many of the buildings were constructed by German prisoner-of-war labour. The airfield housed 8 Squadron in 1919–1920 which was equipped with F.2Bs. The airfield was then used by No. 2 Flying Training School until, April 1923 when 19 Squadron was formed at Duxford with Sopwith Snipes.

By 1925 Duxford’s three fighter squadrons had expanded to include the Gloster Grebes and Armstrong Whitworth Siskins. No.19 Squadron re-equipped with Bristol Bulldogs in 1931, and in 1935, was the first squadron to fly the RAF’s fastest new fighter, the Gloster Gauntlet, capable of 230 mph (375 km/h). The station was enlarged between 1928 and 1932. In 1935, Duxford was the venue for the Silver Jubilee Review before King George V and Queen Mary, the resident squadron still being 19. This squadron gave a special demonstration over Duxford for the King.

In 1936 Flight Lieutenant Frank Whittle, who was studying at Cambridge University, flew regularly from Duxford as a member of the Cambridge University Air Squadron. Whittle went on to develop the jet turbine as a means of powering an aircraft, this enabled Britain to produce the Allies’ first operational jet fighter in 1943 - the Gloster Meteor.

In 1938 No.19 squadron was the first RAF squadron to fly the new Supermarine Spitfire, the first Spitfire was flown into Duxford in August 1938 by Jeffrey Quill, Supermarine’s test pilot.

On 3 September 1939 Britain declared war on Germany and Duxford was ready to play a vital role. By June 1940 Belgium, the Netherlands and France were under German control and the invasion of Britain was their next objective (Operation Sealion). Duxford was placed in a high state of readiness, to create space for additional units at Duxford, 19 Squadron moved to nearby Fowlmere. The dominance of the skies over Britain would be totally critical to keeping German forces out, this became known as The Battle of Britain. Hurricanes first arrived at Duxford in July with the formation of 310 Squadron, which consisted of Czechoslovakian pilots escaped from France. At the end of August Air Vice-Marshal Trafford Leigh-Mallory ordered the Hurricanes of 242 Squadron, down from Coltishall to join 19 and 310 Squadrons on daily standby at Duxford.


A real bouncing bombOn 9 September the Duxford squadrons successfully intercepted and turned back a large force of German bombers before they reached their target. This proved Duxford’s importance, so two more squadrons were added to the Wing, No.302 (Polish) Squadron with Hurricanes, and the Spitfires of No.611 Auxiliary Squadron which had mobilised at Duxford a year before.

On average sixty Spitfires and Hurricanes were dispersed around Duxford and RAF Fowlmere every day. On 15 September 1940 they twice took to the air to repulse Luftwaffe attacks intent at bombing London. RAF fighter Command was victorious, the threat of invasion passed and Duxford’s squadrons had played a critical role. This became known as ’Battle of Britain Day’.

Duxford became the home of several specialist units, including the Air Fighting Development Unit (AFDU). The AFDU’s equipment included captured German aircraft, which they restored to flying condition for evaluation. Duxford was crucial in developing the Hawker Typhoon into a formidable low-level and ground attack fighter and in 1942 the first Typhoon Wing was formed. The first Wing operation took place on 20 June 1942.

During the Battle of Britain, Duxford was the centre of the ’Big Wing’ controversy advocated by the Air Officer Commanding of No. 12 Group, Air Vice-Marshal Trafford Leigh-Mallory. Then, at the end of 1940, the Air Fighting Development Unit (AFDU) moved to Duxford with the job of evaluating new aircraft types including captured enemy aircraft