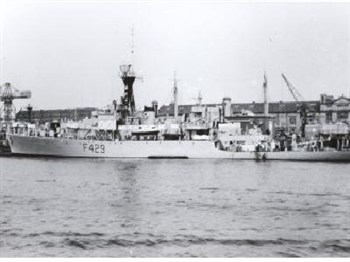 Hope you find this story amusing. I served on Loch Fyne during 1957 - 1958 based mainly at Bahrain. We were travelling through Suez Canal in November 1957 and were anchored in Port Said harbour awaiting arrival of pilot. There were several egyptian feluccas alongside, the natives were selling everything from t shirts to bowls of fruit to feelthy postcards etc.
I was on watch at the time and the PO of the watch said to me, Go down below and check that all the scuttles are closed, I don’t trust these theiving gits, I went down to the after messdeck and low and behold there was an arab with his arm inside an open scuttle trying to steal a crewmates wallet. I ran over and tried to slam the scuttle on his hand, he escaped but I managed to chop off the tips of three fingers.
No one onboard ship noticed this incident so I just kept quiet, dropped his finger ends over the side and cleaned up the blood. Many years later my Wife and I enjoyed our first holiday in Luxor, My Wife loved the history and myths of the country. We were sitting outside our hotel one evening and along came this high ranking police officer covered in gold braid and medals. He asked us if this was our first visit to Egypt
I tried to keep quiet but my Wife (big mouth) said,I have;nt but my husband took part in the Suez invasion in 1956 The Police officer laughed and said ;So you have come back for another go have you, and put out his hand to shake mine. Guess What; His three finger ends were missing I said to him, I remember those fingers Port Said November 1957 He looked at me as if he had seen a dijjaan, but we became the best of friends for the remainder of the holiday

Hows this for a ’Green Rub’ I was serving onboard Loch Fyne on Persian Gulf duty. We were on patrol looking for arab dhows that were being used to carry slaves from the Oman republic to Suadi Arabia. I was a young lad of 18 years old at that time , not yet introduced to the rum ration, and I had pretty good eye sight. I was on ’lookout’ duty and spotted an arab dhow some distance away that appeared to be taking its sail down. I reported ,Arab dhow bearing Red 30, it was on the port bow. No one else onboard saw the dhow, it was’nt even on radar but the Captain, Captain B Pengelly trusted me and ordered the ship to alter course. A little while later we intercepted the dhow and it actually had slaves onboard. It was arrested and escorted to Bahrein. After all the fuss was over the Captain came up to the lookout position and I got a pat on the back for being alert. I was not yet qualified in a specialist role and the Captain asked me what I was interested in doing, I told him that I would like to take up as a radar operator . The Captain was quite shocked and said that being a radar operator was the worst thing I could possibly do, It would ruin a ’Gift’ of wonderful eyesight. He recommended me to qualify a a Gunner. 13 years later I was discharged from the navy as Below Naval Physical standard, being deaf caused by acoustic trauma,ie gunfire. Thanks Skipper, you stopped me from going blind but you made me bleedin deaf.