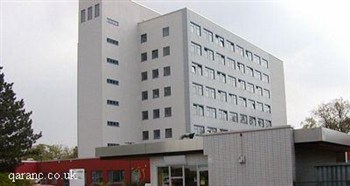 The new BMH Berlin building was opened in May 1967

The building is on Dickensweg in Charlottenburg, Berlin, and is still being used as a hospital with the new name of Paulinen Krankenhaus, mainly for cardiac treatment.  The infamous Rudolph Hess was a visitor here with a full floor blocked off and dedicated to him.

I was at HQ Berlin (British Sector) and 1969 was busy. In July my cousin Adrian visited from Australia and stayed to dinner, Americans walked on the moon and stayed a day, and my mother-in-law visited from Leicester and stayed three months. In August I was promoted WO2 and Alison was born in BMH Berlin to my wife Christine. The Maternity Ward was busy but few patients knew or cared that in the next ward was Spandau Military Prison's last inmate, Hitler's old pal and fellow WW2 War Criminal Rudolf Hess, who was having treatment for something or other, I can't remember what.

I remember Rudolf Hess saying to me :’What did your father do in the war? I replied that he was the man that told the allies all about your rockets. The reason for my rerply was that my father was an SOE agent, operating the radio station R3, in Zenon’s partisan group, working behind enemy lines. He was later captured by the Soviets and held prisoner by the KGB, at Llublianka for the trial against the new Polish government . Some infrormation can be found at the Imperial War Museum, as he was interviewed shortly before he died.