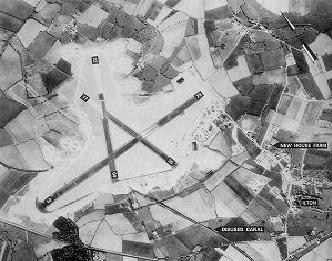 Merryfield airfield was to be built to the Class "A" bomber standard, John Laing Ltd being the main contractors. Work commenced late in 1942 and on 11 November the airfield was listed as one of 16 to be made available for the USAAF to meet the number of troop carrier groups projected for the UK.

The main runway was 6,000 ft and aligned 10-26, the secondaries 4,200ft at 17-35 and 3,660ft at 04-22. All 50 hardstandings were loop types in concrete with bituminous surfaces. Hangars were two T-2s which had become the standard specification for all new airfields (except those having a special purpose) by the beginning of 1943. The technical site was on the south side and the dispersed domestic sites for 3,214 persons lay mostly in the parish of Ilton.

Work proceeded slowly as there was a problem with the drainage of waterways crossing the site. In September 1943, the official name was changed from Isle Abbotts to Merryfield, such changes being usually connected with contractual alterations or where another airfield had a similar sounding name which might cause confusion. In this case, however the change is puzzling as the same contractors were involved and Isle Abbotts appears singularly distinctive.

Formally opened by the RAF on 9 February 1944, US engineers arrived to lay pierced steel planking at the main runway ends for glider marshalling while the necessary facilities for accommodating paratroops in the hangars arrived.

The 441st Troop Carrier Group moved in from RAF Langar on 25 April there were over 70 C-47s dispersed on the airfield. The group’s squadrons and fuselage codes were:

For the D-Day operation, the group dropped 101st Airborne Division paratroops near Cherbourg, then carried out re-supply and glider delivery missions the following day. For its efficiency and achievements during these two days it was, like other troop carrier groups, awarded a Distinguished Unit Citation. During these missions, three C-47s and two CG-4A gliders were missing in action.

The group’s aircraft flew supplies into Normandy as soon as suitable landing strips were available and evacuated casualties to Merryfield. On 17 July the air echelons of the 99th, 100th and 302nd Troop Carrier Squadrons new to Grosseto airbase in Italy to prepare for operations connected with the invasion of southern France returning to Merryfield on 24 August.

Meanwhile, the 301st TCS remained active on the Normandy shuttle while supplies were urgently needed for the advancing Allied armies, although operating from RAF Ramsbury from 7 August until the other squadrons returned.

Soon afterwards word was received that the 50th Troop Carrier Wing would move to France, the 441st being one of the first two groups, with headquarters leaving Merryfield on 6 September for its Advanced Landing Ground (ALG) at Villeneuve (ALG A-63).

From France the group dropped paratroops of 82nd and 101st Airborne Divisions near Nijmegen on 17 September during the air attack on Holland, and towed gliders with reinforcements on 18 and 23 Sep.

In December, the group transported ammunition, rations, medicine, and other supplies to troops of 101st Airborne Division surrounded by the enemy at Bastogne. Released gliders carrying troops of 17th Airborne Division near Wesel on 24 March 1945 when the Allies launched the airborne assault across the Rhine. Hauled gasoline to armored columns in Germany after the Allies crossed the Rhine.

Continually transported freight and personnel in the theater when not participating in airborne operations. Evacuated casualties and prisoners who had been liberated.

The 441st remained overseas after the war as part of United States Air Forces in Europe, performing occupation duty from Frankfurt Germany. It continued to transport personnel and equipment, using C-46, C-47, and C-109 aircraft.

The 441st Troop Carrier Group was inactivated at Frankfurt Germany on 30 September 1946.

Merryfield was retained by the USAAF IX TCC for another two months while C-47s regularly ferried supplies and personnel before being handed over to the RAF at the end of October, thus ending the Ninth Air Force’s association with the station.

The C-47 in its British guise, the Dakota, still held sway at Merryfield but in much smaller numbers than when the 441st TCG was in residence. No. 238 Squadron of RAF Transport Command re-formed there with the type during the winter of 1944-45 and, when it departed overseas, No. 187 was also re-formed at Merryfield to fly Dakotas.

No. 53 Squadron with Liberators replaced No. 187 in September, and it too was replaced by the Stirlings of No. 242 Squadron in December. No. 242 later converted to Yorks but the long distance flights to the Middle and Far East locations on which most of these transport units had been engaged gradually subsided and the Yorks departed in May 1946. The airfield closed that October.

Until the outbreak of the Korean War and a resurgence of air power, civilian caretakers looked after the otherwise deserted airfield. Late in 1951, Merryfield was re-opened as an advanced pilot training establishment with Vampire and Meteor jets. Some additional concrete was laid in front of the main technical site and other building work conducted before the station was again run down towards the end of 1954. During the following two years, a detachment front No. 231 Operational Conversion Unit, with Canberras, was often present. Then came the Royal Navy with Sea Venoms but they withdrew early in 1958 and by 1961 it appeared the airfield had finally been abandoned.

Over the next few years, the airfield deteriorated and the hangars and some other buildings were sold off. A road that was closed when the airfield was built, was re-opened making use of part of the main runway.

Surprisingly, in 1971, part of the airfield was again taken over by the Royal Navy for use in assault helicopter training and exercises that would not conflict with fixed-wing traffic on the Navy’s other stations. Merryfield was soon subject to naval tradition by being labelled HMS Heron. In the event, the Navy’s occupation proved to be the most enduring of the airfield’s half century of existence, for it was still being used by its helicopters.

Today, there is security on the gate as it is still an operational airfield and a restricted area.