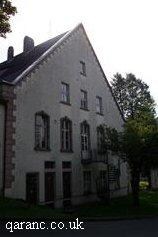 BMH Rinteln was one of several BAOR (British Army On The Rhine) army hospitals in Germany. It is now closed and used as a shelthered housing scheme.

BMH Rinteln was previously an RAF unit in the late 1940s soon after World War Two. RAF Rinteln was then mainly staffed by Royal Air Force personnel though there was a small detachment of officers and other ranks from the Royal Army Medical Corps (RAMC) and a small number of QARANC sisters.

Dancing around a drip stand on night duty with Liz Harper.