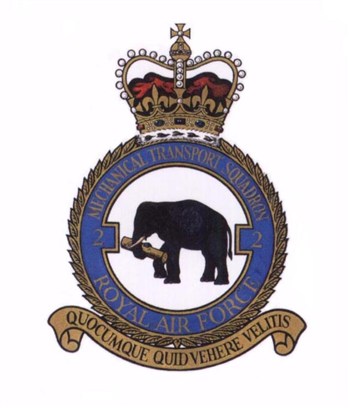 No 2 Mechanical Transport Squadron:
This Unit was formed on 16th July 1940 as No 2 Mechanical Transport Company. It was set up in Cambridge, the offices being in Kings College and the airmen accommodated in Queens College. The earliest records held on the Unit show that the Company ran 63,700 miles and carried 1,200 tons of freight during October 1943. It is also noted that no hours were lost due to air raids. On 23rd March 1945 the Unit moved, the first of many to Royal Air Force Stow-Cum-Quay, Cambridge. The strength of the Unit then was 15 Royal Air Force and 7 Woman Auxillary Air Force Officers, 251 airmen and 52 airwomen. Mileage covered was up to 194,000 miles a month, carrying 4,145 tons. An entry in the Unit Diary for 8th May 1945 reads as follows ‘VE Day - After a Church Parade the Unit was given a day off except for skeleton staff.’ WAAF personnel were disestablished in December 1945 and did not return to the Unit until a few years ago. In 1946 the Company moved to Royal Air Force Leicester East with a strength of 10 Officers and 364 other ranks to be followed 18 months later in 1947 by another move to RAF Warton. A detachment at Woodvale worked principally at Liverpool Docks in connection with troop ships and American freight. In April 1949 the Unit found itself at RAF Bicester with detachments at Bottesford, Harby, Warton, Handforth and Stafford – then moved to RAF Lichfield in late 1952 achieving Squadron status on the 1st June 1954. In 1955 their were 2 Flights ’A’ and ’B’. ’A’ Flight had 30 personnel who drove vehicles up to 7? tons; and ’B’ Flight 20 personnel who drove the ’heavies’ such as Matadors and Leyland Hippos and the towing of  Queen Mary Trailers. During the period 55-56 their was a Driving School for M.O.D. civilians - the Crest signifying the carrying of heavy and valuable loads with the  gold coloured log was approved in April 1957. Due to the impending closure of  RAF Lichfield a final move was made in March 1958 to RAF Stafford where the Squadron is currently based.