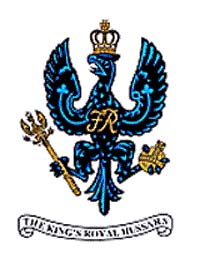 The King’s Royal Hussars (KRH) is a cavalry regiment of the British Army. It is part of the Royal Armoured Corps and was formed on 4 December 1992 by the amalgamation of two other regiments:

The regiment currently serves in the armoured role, equipped with Challenger 2 tanks, and is based in Tidworth, Wiltshire. Alexander Windsor, Earl of Ulster serves as an officer in the regiment.