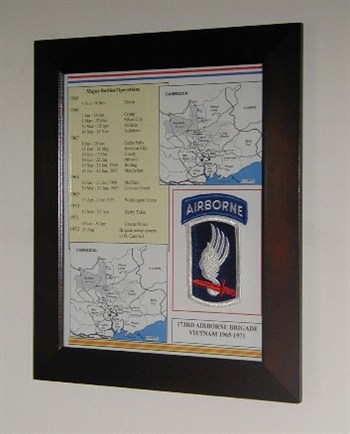 British Airborne Forces were founded during World War II. On the 22nd June 1940 Winston Churchill sent a note to the War Office asking them to raise a Corps of at least 5000 parachutists. In two short years they grew from a small cadre of parachutist’s into a Division sized formation, able to make up an entire Airborne Army. However, such enormous growth was to prove short lived.

By the end of 1942 the 1st Airborne Division had been formed with a compliment of Supporting Arms and services, trained to land by parachute or glider. It was commanded by Major General FAM (Boy) Browning DSO, who had previously commanded 24th Guards Brigade. During the winter of 1942 the 1st Parachute Brigade fought in the Tunisian hills earning their reputation within the Army as ‘High Class Infantry’ and from their German opponents as ‘The Red Devils’.

In 1943 6th Airborne Division was created, based on the 3rd Battalion and two Air Landing Battalions. The 6th Airborne Division took part in the famous Airborne assault into Normandy to seize the important bridgeheads. This successful operation was followed in September 1944 by the largest airborne operation of World War II, when 1st Airborne Division, together with a Polish Brigade, carried out a surprise landing at Arnhem with the objective of seizing the road bridge over the Rhine and holding out until relieved by the 2nd Army advancing from the south.

The end of the war saw a massive reduction in the Armed Forces of all combatants, and Britain’s parachute forces shrank dramatically. British Airborne Forces were reduced to the 16th Independent Parachute Brigade, which was involved in maintaining security of the Suez Canal area. It also conducted an Airborne Intervention Operation to capture the airfield at Port Said in 1956.

The end of the empire and the dedication of the British Army to NATO meant that by the 1970’s the Parachute Regiment had shrunk to a 3 Battalion ghost of its former self. Airborne training was continued almost as a matter of tradition rather than need, since the Regiment’s role was to fight as a conventional Light Infantry, primarily in defence of the British Isles. In any case, the Royal Air Force did not have, or was not willing to allocate the transport assets necessary to support a major Airborne Operation.


In 1977 the Brigade was disbanded, although the Parachute Regiment itself was maintained. The days of out of area operations were considered to be long past.

Then came the Argentine Invasion of The Falklands. 5th Infantry Brigade was deployed to Op CORPORATE, the highly successful capture of The Falkland Islands. Two Parachute battalions were attached to 3 Commando Brigade and distinguished themselves in the war that followed. It clearly showed that there was a place for a British rapid reaction force, ready at short notice for operations outside the NATO area.

In 1983 5th Infantry Brigade was enlarged and redesignated 5 Airborne Brigade. 5 Airborne Brigade is not one of Britains famous Brigades. It does not have centuries of history to its name. Yet the brigade was one of the most elite formations of the British Army. It was a fighting unit which was the heart of Britain's rapid intervention capability, and it lead NATO’s rapid reaction force in the 1990’s.


The Brigade consisted of two Parachute Battalions, two Infantry Battalions trained in the air assault role, an Artillery Regiment and a light Armoured Regiment. It also had under its command such vital support units as an Engineer Regiment, a Field Ambulance, and a Logistics Battalion consisting of a REME field workshop, an Ordnance Company and a Transport Squadron. Many of the support units were also parachute qualified. Immediate air support was provided by an Army Air Corp squadron equipped with Lynx and Gazelle helicopters, but if large scale movement was required the Brigade could call on the much larger Chinooks and Puma’s of the Royal Air Force.