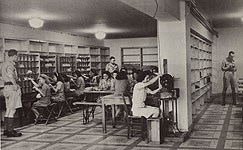 British 8th Army in North Africa Formed in September 1941 from the Western Desert Force, British 8th Army (comprising British, Commonwealth, Free French and Polish troops) went on to wage a lengthy, hard-fought campaign against Axis forces across the deserts of North Africa. The Desert War was unlike any other fought by the British Army, involving highly mobile operations covering vast distances. The hot, unforgiving climate in which the troops lived and fought was almost as troublesome as the enemy. During its two-year period of service in North Africa, 8th Army underwent major changes in organization, equipment and training to accustom it to desert warfare.

The APS was not involved in the initial planning stages of Operation Torch, the 1942 Anglo-American invasion of North Africa. Consequently a Base APO was not established in Algiers until a month after the invasion and through no fault of the APS the mail services to the BNAF were very poor in the initial stages. This was worsened by the fact that a convoy carrying the Christmas mails was sunk.
After consultation between the military authorities and the APS air links with the UK were established and both air letter and airgraph services were made available. Kodak established an airgraph processing station in Algiers, which was later to process the airgraphs sent by troops engaged in the Italian Campaign.

In theatre the mails were carried along the North African coast to the front lines by sea, rail and vehicles. The road service that operated over 500 miles from Algiers to the front was described as having the “the regularity of a town collection in peacetime Britain”.
A staff officer with the 6th Armoured Division commented that “As soon as the tanks pulled out of battle, there was the mail wanting for them – incredible”.