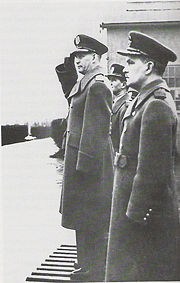 Eastchurch is a village on the Isle of Sheppey, a mile east of Minster, England. As the village website says "... it has a history steeped in stories of piracy and smugglers.

Eastchurch is the ’home of British aviation’ - Eastchurch witnessed the first controlled flight by a British pilot on British soil. It has a history in aviation, near where the prisons are located now, was an airfield. This is where the Wright brothers first flew their planes. It is also home to many, many forms of aircraft and where they were originally developed in the early 1900s. DeHavilland being one of them. An aviation memorial is located in the centre of the village, opposite the village church. In July 1911, it was the site of the Gordon Bennett Trophy air race: see the notes in the Isle of Sheppey article. During the Battle of Britain, it was one of notable bases of the Polish Air Forces.

The gatehouse is now all that remains of Shurland Hall, connected with many families including the Cheneys who were here in 1274; and Sir John Stanley, who was Lord Warden of the Cinque Ports in the 15th century. It was also rumoured to have housed Henry VIII and his wife, Ann Boleyn for a few nights. For a small period of time, prior to when the National Trust attained it, it was owned by Violet Searle, a business lady who developed an early houses within the village in ’Warden Road’. The gatehouse is now in the care of the National Trust, and is now in the process of being renovated and restored, this is also being documented by a TV Station.

In Hidden Kent by Alan Major (Countryside Books, 1994), there is a note from the 1847 gazetteer that comments on the scarcity of fresh water which "makes the inhabitants very careful to preserve such falls from the clouds...." and tells of spouts from the church designed to fill large tubs around it in the churchyard.