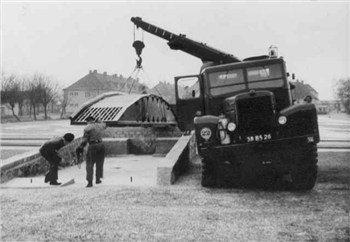 The Royal Engineers were heavily involved in armoured warfare during the later stages of the Great War. As with any new equipment comes a new obstacle to be overcome. In this case it was trenches and shell craters. Fascines and other specialist equipments were developed in order to keep up the advance.

On the arrival of the Second World War, the British with their backward looking defence policy, decided that the Engineers should not require nor provide an armoured capability. This proved disastrous after the mauling that was Dunkirk.
Now realising that they were in it for the long slog, the British decided to develop 79th Armoured Division, commanded by Major General Hobart. The unit comprised of armoured vehicles modified for specialist roles, intended to assist with the landing phase of Operation Overlord (these vehicles became known as Hobart’s Funnies).
Within the Division were 1st Assault Brigade, Royal Engineers, which consisted a number of regiments including 42 Assault Regiment.

After the war in 1948, 42 Assault Regiment was re-designated 32 Assault Engineer Regiment. The Regiment was disbanded in 1957, except for 26 Armoured Engineer Squadron, which moved to Haig Lines, Hohne, Germany.
The need for more armoured CF assault engineers in BAOR was recognised, and in March 1965, 2 Field Squadron re-roled as an armoured engineer squadron with two troops from 26 Squadron also being absorbed. Thus 32 Engineer Regiment was reformed. The amalgamation parade was held in Hohne in June of that year, and was taken by Colonel (Retired) J.F.D. Savage DSO RE, a former member of 42 Assault Regiment RE. It was both a mounted and a foot parade, the Squadron marching past followed by a drive past of AFV’s.


The unit consisted of:

30 Field Squadron (Sqn insignia was a Zulu shield in front of crossed assigais and thirty in Roman Numerals(descended from Roukes Drift)).

It remained so until the regiment disbanded around October/November 1977.