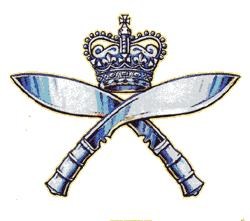 The Royal Gurkha Rifles are considered to be some of the finest soldiers in the world, as is evidenced by the high regard they are held in for both their fighting skill, and their smartness of turnout on parade. Their standard of drill is considered to be on a par with that of the Foot Guards and in July 1997 the regiment mounted the guard at Buckingham Palace.

In December 1995, Lieutenant-Colonel Bijaykumar Rawat became the commanding officer of the 1st Battalion, the first Nepalese to become a battalion commander in the RGR. He oversaw the departure of the battalion from Hong Kong just before that city’s transfer to Chinese control, and the battalion’s relocation to Church Crookham, Hampshire in 1996. Their motto is: Better to die than live a coward.
Added on 19/03/2010

The two battalions of the RGR are formed as light role infantry; they are not equipped with either armoured or wheeled vehicles. One battalion is based at Shorncliffe, near Folkestone in Kent as part of 52 Infantry Brigade, and is available for deployment to most areas in Europe and Africa. The other is based at the British garrison in Brunei as part of Britains commitment to maintaining a military presence in SE Asia. The two battalions rotate in each role, usually for three years at a time.

As part of the restructuring of the infantry, the UK based battalion was transferred from 2 Infantry Brigade to 52 Infantry Brigade, to be given a more mainstream role. Together with the Royal Irish Regiment and the Argyll and Sutherland Highlanders (5 SCOTS), the UK based RGR battalion will rotate as part of 16 Air Assault Brigade—it will spend five years with this formation, followed by two years as a light infantry battalion with 52 Brigade. 2RGR will take on this role for the first time in 2010.

The proximity to Afghanistan has meant that the Brunei based battalion has been called upon to deploy as part of the British force. Twice during its most recent Brunei posting the 2nd Battalion was deployed as the Afghanistan Roulement Infantry Battalion, while the 1st Battalion deployed as part of 52 Infantry Brigade in late 2007. During this tour, Cornet HRH Prince Henry of Wales was attached for a period to the 1RGR battlegroup as a Forward Air Controller.