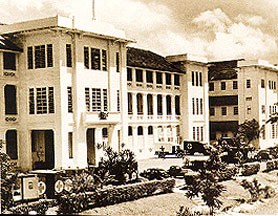 Singapore was an important part of the British Empire and strategically placed on the Malay Peninsula. It was nicknamed the Gibraltar of the Far East.

BMH Singapore was also known as Alexandra Hospital or Alexandra Military Hospital and was opened in 1940. Accommodation and the Nursing Sisters Mess were built in nearby Alexandra Park. There were other previous buildings known as BMH Singapore and as the British military presence was increased each hospital became bigger to meet the growing army’s medical and nursing needs. BMH Singapore was the principal hospital in the Far East for British troops. Previous hospitals included the first BMH Singapore on Pulau Blakang Mati (Sentosa Island) in 1909 and Tangling Barracks, Singapore in 1912.

Met QARANC Jill Davies 1958 in Singapore. Got engaged and subsequently married 1961. Been back to Singapore often and revisited the hospital. Just celebrated 55yrs married.