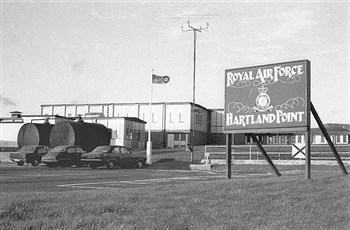 RAF Hartland Point (code HAT) was built as part of the first stage of the ROTOR Plan which was itself divided into four phases. Phase 1 was the re-establishment of 28 WW2 Chain Home radar stations. 13 were brought up to a fully operational state while the remaining 15 were brought up to a ’readiness’ state. These stations would have required some notice before they were fully operational.

Phase 4 comprised of five R6 semi submerged protected stations and nine less substantial R8 stations. Being on the west side of the country the radar station at Hartland Point was provided
Type 13 Radar on 25’ gantry in 1975 click to enlarge
with a prefabricated R8 structure built of four parallel ranges of prefabricated SECO (wood fibre and asbestos panels) hutting with a two level operations room. The building would have offered no protection from any kind of attack. Of the nine R8’s built, RAF Chenies was the only station to be fully operational; all the others were ’readiness’. The other R8 technical blocks were at Calvo, Charmy Down, Comberton, Gailes, Scaranish, St. Anne’s and Trewan Sands.

RAF Hartland Point was renamed 405 Signals Unit on 12th June 1953. By 30th August 1953 the first two phases of the ROTOR programme were finished and Phase 3 buildings were complete with the installation well advanced. By this date the fourteen Phase 4 technical blocks which comprised five semi-sunken R6 structures and nine prefabricated R8 structures were nearing completion with technical installation expected to be finished by early 1954.

I just loved that base.