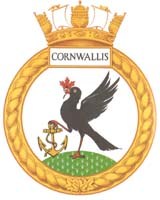 HMCS Cornwallis
The rapid expansion of the Royal Canadian Navy during the early years of World War II saw many port facilities on the east coast of Canada become quickly taxed by operational requirements, particularly during the Battle of the Atlantic.

In early 1942, the Department of National Defence began examining the possibility of transferring naval recruit training to a new facility in southwestern Nova Scotia with convenient access to Halifax.

DND preferred the South Shore port town of Shelburne with its large natural harbour and nearby seaplane patrol base RCAF Station Shelburne, however it is presumed that political pressure from J.L. Illsley, the federal Minister of Finance and MP for Digby—Annapolis—Kings, saw DND reconsider. A location in Ilsley’s riding on the shallower but protected Annapolis Basin straddling the western border of Clementsport and eastern border of Deep Brook was quickly adopted.

While the location for the training base was being sorted out, the actual training establishment was founded at a cost of $9 million at Halifax’s HMCS Dockyard on May 1 1942 and was named HMCS Cornwallis in honour of Edward Cornwallis, the founder of Halifax.

With the location of the new base decided, construction began in June of that year with a budget of $15 million. The base occupied a small peninsula jutting into the Annapolis Basin several miles east of the mouth of the Bear River where a gypsum loading facility was located in Deep Brook. The property was relatively level and bisected by the Yarmouth-Windsor Junction (where it connected with CNR to Halifax) mainline of the Dominion Atlantic Railway. New buildings were completed during the winter of 1942-1943 and the training establishment officially moved to the new base from HMCS Dockyard on April 14, 1943. At this time the base took on the name HMCS Cornwallis.

The navy had a tremendous economic impact on the communities in western Annapolis County and eastern Digby County, with training personnel and recruits (when not in basic training) travelling around the local area. Approximately 2,500 personnel initially transferred with the training establishment from Halifax. The base would quickly grow to a peak strength of over 11,000 officers and enlisted personnel and recruits for the duration of the conflict, becoming the largest naval training facility for new recruits in the British Commonwealth in terms of the number of personnel being trained.

The Dominion Atlantic operated special troop trains to the base’s station and also relied on scheduled passenger service, connecting with Canadian Pacific Railway passenger trains from Saint John, New Brunswick (recruits would then take a CPR ferry across the Bay of Fundy to nearby Digby) and Canadian National Railways passenger trains at Truro and Halifax.

HMCS Cornwallis extended from the small level peninsula on the Annapolis Basin south up the hillside overlooking the basin, providing suitable room for exercise and marches. A large firing range property was also developed immediately north of the Annapolis River at Granville Ferry, opposite the town of Annapolis Royal.

New recruits being trained as sailors for service in the RCN endured boot camp at HMCS Cornwallis, followed by specific naval training , including seamanship, boat handling, drill, self-defense, ropework, and weapons. The duration of courses typically varied from 6-8 weeks, however the urgency of war sometimes shortened this period. Very few courses would receive sea training prior to active duty, although RCN warships frequented the Bay of Fundy and Annapolis Basin during patrols and sometimes called on the training base. Many newly commissioned RCN ships would have as few as a half-dozen experienced sailors onboard for the maid