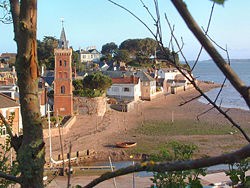 Lympstone is a village and civil parish in English county of Devon. It has a harbour on the estuary of the River Exe, lying at the outlet of Wotton Brook between cliffs of red breccia. The promontory to the north of the harbour is topped by a flat pasture, Cliff Field, that is managed by the National Trust and used for football matches and other local events.

Lympstone has rail services on the "Avocet Line" to Exmouth and Exeter from Lympstone Village railway station.

It is known locally for Peter’s Tower, an Italianate riverfront brick clock tower built around 1885 by W.H. Peters as a memorial to his wife, and for its tradition of residents drying washing on the foreshore. The riverside houses back directly on to the shore, with no continuous seawall, and the passageways between them to the beach are equipped with metal flood gates that are closed by residents when they are warned of high tides by a local alert network.

Ralph Lane, equerry to Queen Elizabeth I, was born in Lympstone. He was a soldier who went with Sir Walter Raleigh on his second expedition to the New World in 1585. He founded a colony on Roanoke Island amidst great hardship and deprivation. He was later present at the defeat of the Spanish Armada

It was around 00.30hrs on a deep and very crisp November night, on the banks of the River Exe. All was still, duty men were taking a stroll around camp just to ensure we had not left rubbish out of bins, no fires burning, No lights left on that shouldn't be, etc. You know the drill!
And in that quiet frost bitten night, there came a shout and suddenly all hell broke loose!! Everything from Junior snot to the Adjetants horse were scrambled to the parade ground for muster and roll call. All were there! Including the WRENS, who were the only ones allowed to take long enough to grab something warm to cover themselves, Odd that!
Provost marshall came swaggering onto the parade ground and whispered to the duty officer who then returned to the commanding officer. The parade was called to attention. All was silent for a few moments. Everybody from junior snot to the adjetants horse were shivering when, in a very loud voice and language which seemed to show how jacked this guy was, the commanding officer called false alarm and we all returned to bed some three hours later.
Next day we all reported for duty. The troop sergeant announced that the events in the small hours of the night had been due to a package which seemed to be ticking. This turned out to be an ALARM CLOCK!!! One of the senior snots had been into Exmouth for the day, purchased the clock, had a few wets, staggered up the hill (The train station at Lympstone is at the bottom of a hill) had dropped the clock and the rest is history.
The camp magazine ran a slot about the need for prpoer security, all should be aware etc. Looking back I can see how serious this was at the time, However, as an ex-serviceman, I can now see the funny side of the event! That clock certainly raised the alarnm that night!! Vince P