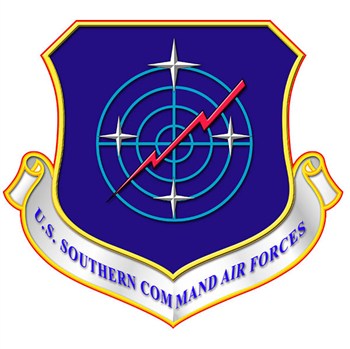 AFSOUTH serves as a primary conventional fighter and bomber WFHQ trained and ready for worldwide employment of airpower. It is responsible for the combat readiness of seven active-duty wings, which comprise more than 33,000 personnel and 400 aircraft. AFSOUTH is also responsible for three active-duty Direct Reporting Units, which comprise more than 1,200 personnel; and 14 gained units of the AFR and ANG, featuring an additional 18,800 personnel and more than 200 aircraft.

The commander of AFSOUTH is Lt Gen Norman Seip.

I definitely walked into this one. I was asked on 1968’s Annual Confidential Report interview with my boss, Major Peter Roupell QUEENS, GS02 (Int & Sy) Berlin, if I had a preference for where I wanted to serve next. I said HQ Allied Forces Southern Europe (HQ AFSOUTH) at Naples (home of ice-cream, spaghetti, pizza and, I learnt later, frequent torrential downpours, clouds of choking dust, searing sunshine and poorly kept vehicles driven by folk with a massive superiority complex and a death-wish). Be careful what you hope for as that was precisely where I was posted in October 1969.
My predecessor in Naples, WO1 Ian Harding RAOC, had been in post over 4 years when I arrived. After the 3¾-years point had passed he’d got on to RAOC Manning & Records and the upshot was all RAOC personnel serving there had disappeared from the postings plot! I took over the lease of Ian’s privately rented top floor flat because it suited my purpose as it was at a seaside town called Lucrino, 7 miles outside of heaving Naples, and had views of the promontory of Baia, rich in ancient Roman history, the Isle of Ischia and Vesuvius. I figured it would be a nice place to live during my 3-year tour of duty and I liked the little balconies off bedroom and living room and the stout steel shutters that protected every window and door.
HQ AFSOUTH is at Bagnoli, on the western edge of Naples, in a large compound protected by walls, wire and a contingent of Carabinieri. These immaculate and fierce warrior-policemen are known for their no-nonsense prowess with submachine gun, armoured car, tear gas and water cannon and, because I was a WO2, I merited not only a salute from them but also a cheery greeting of “Bon juorno, Marashallo!” There were many UK soldiers on Base, all on 3-year tours, while sailors, airmen and officers of all three services did just two years. So much for the good points.
HQ AFSOUTH is NATO so, in addition to British servicemen and women, there are Americans, Italians, Greeks and Turks serving there. Although the allocation of command and desk officer posts is apparently on fair shares for all, every Division or Branch chief who is not an American has an American for his deputy. Americans are also sewn through each of the Divisions and Branches in numbers that, when you add them up, almost equal the total of the other nations. No need to explain that then.
It’s said Africa starts at Naples. It’s hot, dusty, cramped, dirty and subject to volcanic activity although the people are friendly enough (when not stealing the wheels off your car). Roads of motorway standard point north, east and south but my personal view is they were built old. A few miles up the coast is the NATO Beach, a long tract of sand for which you pay to enter. Within the Beach ‘Concessions’ offer for sale burgers, beer, Coke, flip flops and li-los but, come 15 September, the Beach closes and while it’s true the fierce heat has gone from the sun, it’s nicely warm for another six to eight weeks. I used the Beach quite a lot between 16 September and the end of October 1970.
My job was in Intelligence Production Branch, Intelligence Division. The Div chief was Turkish Brig-Gen Cevyet Cetinelli while my Branch chief was Greek Col Petros Papayannopoulos (Papa for short). I never saw them together. There was a Branch at the end of my corridor called POET (Plans, Operations, Exercises & Training) headed by Colonel Leigh Maxwell formerly of the Intelligence Corps (he became Custodian, Tower of London) and who no American would dare to serve as ‘deputy.’ Col Ellwood M. Beeson USAF was Papa’s deputy and my time was spent passing notes between them as, for reasons unknown, they didn’t speak (I usually re-wrote Papa’s notes into proper English). Papa did an annual report on Italian Captain Mario Troisi, desk officer War Potential 1, saying “He works hardly ever” but I knew what he meant so changed it to “He always works very hard”. I guess that typifies the work I did there.
I enjoyed both the ancient and modern historical aspects of being in Italia. I visited Vesuvius, Rome, Pompeii, Herculaneum, Bari, the Gladiator School at Capua and many other less well-known ancient sites, as well as Monte Cassino, Palermo and Anzio and their associated war graves. I served alongside S/Sgt Don Shone RAOC, Cpl Walt Reitzel US Army, Lt Col Mehmet Erkula and Major Musafir Yertut, both Turkish Army, Cmdr Mario di Pace Italian Navy, Lt Cmdr John Waldron US Navy, Wing Cmdr Sydney Bussey RAF DFC AFC & 2 bars (one of ‘The Few’) and Major Vincento Sachetti Italian Air Force. After I’d been in post four months I was called to the Ministry of Defence about working in an Embassy, then notified of my selection for our Bucharest Embassy and left Naples on 1 May 1971 on the long road to Romania, via my staging post of the Depot Battalion RAOC at Deepcut, Surrey. Hooray!