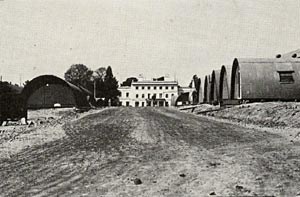 After the entry of the United States into the Second World War, Prime Minister Churchill and US President Roosevelt, decided that only an invasion of France would ensure the defeat of the Nazis in Europe. A provisional date of the summer of 1944 was decided and plans were made to build up the necessary forces in England. The largest supply depot in southern England was established on the Exeter Golf and Country Club, on the Topsham Road, south of the city and designated the code name JOWL-93. It would act as the main supply camp for Falmouth, Fowey, Plymouth and Dartmouth, all main embarkation ports for the allied fleet that would sail to Normandy.
Exeter had the necessary connections, especially by rail to other parts of Britain and on to the embarkation ports. The British Government acquired half of the Exeter Golf Course at Countess Wear, along with the same amount of adjoining farm land. In addition, open-storage facilities were acquired at the Hawkerland Valley and Winslade Park.