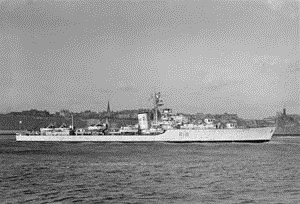 the 5th flotilla, 7 ships doing an A sweep,7 wire cables from stern to stern to cut up some mines, anyway all of a sudden the next ship headed straight for us hit us amid ships, our skipper shouted over the loud hailer to the offending ship , If you touch me there again I shall scream. Anyway the hole it made was above the water line, we all thought we were going back to harbour for repairs, and a run ashore, O'h no covered it with canvas painted it grey & carried on with the exercise.
another time on the same ship, I was down in the steering gear compartment, checking temeratures etc, when all of a sudden a hell of a bang, our skipper had got a school of fish on the radar and dropped several depth charges, we had enough fish which were stunned to do the whole crew of 250 fish and chips. So hows that me hearty's Peter.