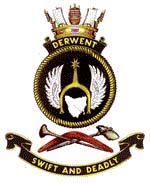 Derwent was named after the Derwent River in Hobart, Tasmania.

HMAS Derwent was the first RAN vessel to launch a guided missile when she fired a Seacat missile on May 25, 1964.

From 1991 to 1992, Derwent’s Seacat and Ikara launchers were removed. During this time, Derwent was used as a training vessel.

Prior to Australian ships deploying to the Persian Gulf, Derwent conducted trials in launching the RBS 70 Surface to Air Missile from a naval platform.