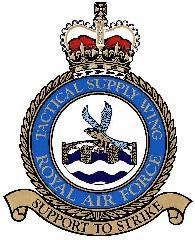 NATO’s decision in the late 1960’s to abandon its ’tripwire’ strategy in favour of one of ’flexible response’ identified the need for a discrete tactical supply unit consequently "The Tactical Supply Wing" formed at RAF Stafford in late 1970 and supported a number of exercises, before being declared operational on 1 January 1971. The potential for enhanced flexibility and mobility afforded by TSW being quickly seized upon, thus over the years, TSW has been involved in a great many operations, peacekeeping deployments and humanitarian relief activities.

Soon after its formation, TSW very quickly embarked on its first operational deployment and was sent to Northern Ireland in 1971. These duties have been maintained, without a break, through to the present day. There are currently 22 TSW personnel deployed at 5 security force operating bases throughout Northern Ireland operating 24 hours a day 365 Days a year .