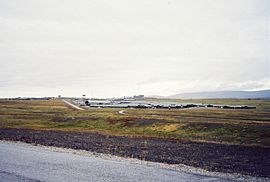 RAF Mount Pleasant  (also known as Mount Pleasant Airport, Mount Pleasant Complex or MPA) is a military base for the Royal Air Force in the British Overseas Territory of the Falkland Islands. The facility is part of the British Forces South Atlantic Islands (BFSAI). The station, home to between 1,000 and 2,000 British military personnel, is located about thirty miles southwest of Stanley, the capital of the Falklands, on the island of East Falkland. The world’s longest corridor, a half-mile long, links barracks, messes and recreational and welfare areas of the base. The base is occasionally referred to by its residents as the Death Star because of its sometimes confusing layout.

RAF Mount Pleasant is the most recent purpose-built airfield in the Royal Air Force. The RAF previously had a small base at Stanley airfield after the end of the hostilities in 1982. During the Falklands War when the islands were occupied by Argentine military forces, British aircraft were sent to disable the runway with RAF Strike Command Vulcan bombers (Operation Black Buck) and Royal Navy Sea Harriers. The raids were moderately successful, and on the first Black Buck mission one 1,000 lb bomb hit the runway in the middle, disabling it. However, temporary repairs by the Argentines did allow Hercules C130 transport aircraft to bring in supplies and take out casualties until the end of the conflict. After the end of hostilities the runway was fully repaired by British military engineers.

After the surrender of the Argentine ground forces on the islands, the British still faced the problem of potential Argentine air attacks from the Argentine homeland, so an aircraft carrier had to remain on station to guard the islands with its squadron of Sea Harriers until the local airfield was prepared for jet aircraft. HMS Hermes was the first to take guard duty, whilst HMS Invincible went north to change (at sea) a gearbox that had broken while departing the mainland UK. The Argentines claimed the aircraft carrier was hit on May 30, and needed repairs. Invincible then returned to relieve Hermes which urgently needed to return to the UK for boiler cleaning. Invincible returned until she was relieved by the newly built HMS Illustrious, which was quickly rushed south and commissioned during the journey. Once the Port Stanley runway was available for jets, Illustrious was relieved by several RAF Phantom FGR.2.

The British government felt that Stanley airfield was not the best option for a large, permanent base and decided to construct a new RAF station and make it the centrepiece of the Islands’ considerably strengthened defences. This was intended to deter any future Argentine attempts to take the islands by force. Mount Pleasant, to the west of Stanley, was chosen as the site for the new station. The airfield was opened by Prince Andrew in 1985 (Prince Andrew served in the Falklands War), and became fully operational in 1986.


Search for a name in our archive