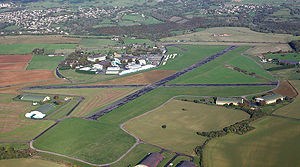 Aston Down is a former Royal Air Force airfield near Minchinhampton, Gloucestershire, South West England. It was used by the RAF from the First World War until 1967, since when it has been the home of the Cotswold Gliding Club. In 2002 the land and hangars surrounding the airfield were sold by the Ministry of Defence to private developers for use as industrial units.

Aston Down was first used as an airfield in the First World War, serving as a base for the Australian Flying Corps. Originally known as Minchinhampton Aerodrome, the airfield was renamed Aston Down in 1938 at the request of the residents of Minchinhampton village, which lies about one mile (1.5 km) to the west of the airfield, who feared not enemy attack, but a fall in the value of their houses. During the Second World War the hard runways and hangars were built. Until early 1941 Aston Down was host to the RAF’s No. 55 OTU (Officer Training Unit), after which it was used as a ferry base. More recently the airfield was used as a satellite airfield for the Central Flying School at RAF Little Rissington, with trainee pilots practising their circuits in BAC Jet Provosts. Visits by the Red Arrows were also frequent until their departure from the nearby Kemble Airport in 1983.