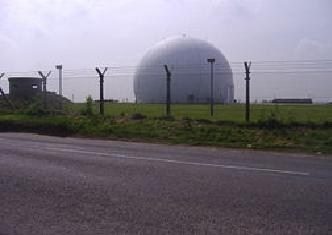 The Radar station was established on the cliff top at Trimingham by the British Army in the latter part of 1941. It was used to detect German E-Boats and low flying aircraft and was then equipped with a CD Mk.4 radar. The station also operated as an Oboe Navigation Station. Oboe worked using two stations at different and well-separated locations in England to transmit a signal to a Mosquito Pathfinder bomber carrying a radio transponder. The transponder reflected the signals, which were then received by the two stations. The round-trip time of each signal gave the distance to the bombers and guided them to there target.

In April of 1942 Trimingham was transferred from the authority of the War Office over to the Air Ministry. The base had now been installed with a Type 54 radar on a 200 foot tower. The operating system was known as a Chain Home Extra Low (CHEL)/CD station. By 1945 the ’Oboe’ equipment had been removed and In 1947 Trimingham was placed in the Northern Signals Area under 90 Group. Between 1948 and 1949 the base was placed in care and maintenance. In January of 1949 the base was once again activated and in 1950 was renamed 432 Signals Unit. In June of 1950 RAF Trimingham was selected to be a Centimetric Early Warning Station (CEW). Between this event and 1961 the radar station had various systems installed at the site and operated constantly as the eyes and ears of the UK’s early warning systems until February of 1964 when the base was mothballed. By 1965 the station had been largely dismantled and all the radar arrays had been removed apart from the Type 54 behind Beacon Hill Cottage but that had been removed by 1972.

In 1981 the RAF Trmingham was closed and the site had been sold and the guardhouse converted into a private house, but by the latter part of the 1980’s the now Ministry of Defence decided to repurchase the site. The RAF installed a Marconi Type 91 ’Martello’ radar operated by 432 Signals Unit acting as a Ready Platform (along with RAF Hopton and RAF Weybourne) for the UKADGE Series II (United Kingdom Air Defence Ground Environment) Radar System controlled from the R3 underground control centre at RAF Neatishead. The guardhouse was converted into staff accommodation and offices and basic mess facilities. In May 1987 the Marconi Type 91 ’Martello’ radar at Trimingham was sold to the Turkish Ministry of Defence and it was replaced by a Type 93 (Plessey type ADGE-305, NATO designation TGRI 50011) that had been moved from Hopton when that base was closed. The Type 93 was originally a mobile installation, but at Trimingham it was fixed to a permanent mounting with a Kevlon dome composed of irregular polygons erected around it and became known locally as the Trimingham golf ball Todaythe Type 93 is still operational and feeds constant data back to the Control and Reporting Centres (CRC’s) at RAF Boulmer in Northumberland and RAF Scampton in Lincolnshire. RAF Neatishead has now been downgraded to a remote radar head which is actually at Trimingham. Neatishead only being retained as the circuits from Trimingham pass through Neatishead.