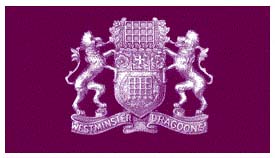 The Westminster Dragoons (WDs) are central London’s only Territorial Army cavalry unit. One of the Royal Yeomanry’s five squadrons, their current role is to support the Formation Reconnaissance Regiments and the Joint Chemical Biological Radiological and Nuclear Regiment on operations by providing skilled CBRN reconnaissance soldiers.

Formed in the aftermath of Second Boer War as part of the County of London Yeomanry, the WDs fought in the Battle of Gallipoli and led British forces onto the beaches during the Normandy Invasion in 1944. The squadron most recently saw action on Operation Telic, when was it was mobilised for the 2003 war in Iraq and again in 2006 for peace support operations there. Since 2007, soldiers and officers of the squadron have deployed as individual reinforcements on Operation Herrick in Afghanistan.
Following the lessons learned from the Iraq conflict in 2003, the Westminster Dragoons’ role is expanding with an increased emphasis on the light CBRN reconnaissance role using a range of cutting-edge detection equipment. In particular, it is planned that the WDs will follow the move made by the Joint CBRN Regiment towards working with the air assault infantry and the commandos.

The Westminster Dragoons use Fuchs and FV 103 Spartan armoured reconnaissance vehicles along with other high mobility transportation and specialist CBRN detection equipment.