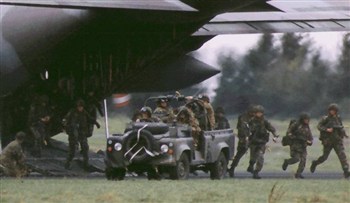 The United Kingdom Mobile Air Movements Squadron (UKMAMS) was formed at RAF Abingdon in 1966 as the RAF’s UK based mobile movements capability. Following the draw down of the RAF’s fixed presence overseas in the early 70s, the Sqn’s remit increased to include all of the residual movements tasks at world-wide locations other than those where RAF Stations with established Movements Squadrons existed. In 1974, UKMAMS relocated from Abingdon to RAF Lyneham and amalgamated with the existing Station movements squadron to provide a dual Base and Mobile capability. The Sqn’s remit has remained unchanged to this day, that is: to load and unload freight and personnel to and from transport aircraft whenever and wherever tasked. To meet this remit the Sqn supports RAF Lyneham 24 hours per day every day of the year, and has a fully airmobile, field-equipped capability, held on 90 minutes notice for world-wide deployment. The Squadron is commanded by a Supply Branch (Movements qualified) wing commander and is split into 3 flights: Base Air Movements Flight, Mobile Air Movements Flight and Support, Standards and Training Flight.

Mobile Air Movements Flight (MAMF) is tasked directly by HQ 2 Group and has, until recently, 15 x 6 man mobile teams, composed of Trade Group 18 (Movements) tradesmen, each led by a junior Supply Branch (Movements) officer. The team size and structure has proved time and again to be successful and allows for ready augmentation thereby offering both operational flexibility and capability. The flight now has 9 x 10 man teams, that are tasked world-wide to wherever the UK needs military air movements support but no permanent RAF Movements presence or handling agreement exists