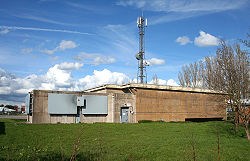 RAF Hack Green was an RAF base situated near Nantwich, Cheshire, England. At the end of the Second World War it was converted into a Nuclear Bunker

It is now a museum that can be visited by the public.

The first military use of the area was in World War II, when a Starfish site was established at Hack Green. Its purpose was to confuse Luftwaffe bombers looking for the vital railway junction at Crewe.

In the 1950s, the site was modernised as part of the ROTOR project. This included the provision of a substantial semi-sunk reinforced concrete bunker or blockhouse (type R6).

The site was abandoned and remained derelict for many years, until the Home Office took it over. They rebuilt the R6 bunker as a Regional Government Headquarters (RGHQs) - one of a network of 17 such sites throughout the UK - designed to enable government to continue in the aftermath of a major nuclear attack on the UK.

In about 1992, following the end of the Cold War, the Home Office abandoned its network of RGHQs and sold many of the sites. This one was bought by a private company and subsequently opened to the public in 1998 as a museum with a Cold War theme.