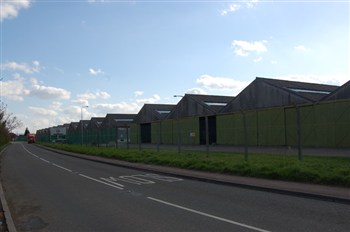 Central Vehicle Depot at Ashchurch
Military vehicles are maintained and stored at this facility immediately to the east of the M5 near Tewkesbury.
Ashchurch is a Central vehicle Depot where every type of vehicle is stored in preservation. It is also home to the Special Projects Wing (Vehicle) and they work directly for 22.

The parish of Ashchurch lies immediately east of Tewkesbury. In the Middle Ages Ashchurch was part of the parish of Tewkesbury, and also part of Tewkesbury manor, but it established its independence soon after the Dissolution. Ashchurch is a large parish, fairly compact in shape and formerly 4,284 a. in area. In 1882 a detached part comprising 10 a. round Aston Mill was transferred to Kemerton; in 1935 Ashchurch lost 133 a. in the west to Tewkesbury and gained 96 a. from Tewkesbury, so that in 1966 Ashchurch parish amounted to 4,237 a. The account here printed relates to the area of the parish as it was from 1882 to 1935. The parish was bounded on the north by the Carrant brook, which at the western end divided it from Worcestershire; the rest of the parish boundary followed streams and minor roads for short stretches but was marked mainly by field boundaries. The parish was divided into several townships or tithings, the number being four from the late 15th century onwards; the boundaries between the tithings roughly quarter the parish, with Northway and Newton in the north-west, Aston on Carrant in the north-east, Pamington in the south-east, and Fiddington in the south-west.
The land of the parish is flat and low-lying: it is almost exclusively between the 50 ft. and 100 ft. contours. The soil and sub-soil are heavy clay of the Lower Lias, but there are some sandy patches. The Tirle brook, which has several tributaries, flows across the middle of the parish. Near where it enters the parish it was straightened in one place after 1768 and in another after 1816. The Carrant brook has a divided course along the north-west of Ashchurch. A diversion may be indicated by an order to the inhabitants of Newton in 1482 to construct (facere) part of the River Carrant. In 1520 the miller of Cowfield Mill made an agreement with the tenants of Northway and Newton that the tenants should have sufficient water in Gloucestershire for their beasts and that the miller should turn the watercourse from Gloucestershire into Worcestershire; below Cowfield Mill the county boundary follows the southern instead of the northern branch of the stream.
For most of its history Ashchurch has been agricultural. A large part of the land lay in open fields, which were inclosed partly in the 16th century or early 17th and partly in the period 1809–16 under separate Acts of Parliament for Pamington, Fiddington, and Aston on Carrant. In 1966 ridge and furrow was still to be seen in pasture in all corners of the parish, not only where the land was inclosed in the early 19th century but also where it had been inclosed earlier. Northway takes its name from a hay or park from which presumably was made the assart of Northway granted to Tewkesbury Abbey in 1107. Something at least of the hay survived into the 17th century as the close called High, and between 1667 and 1675 Northway manor court presented the park as defective or in decay.
During the Second World War the location of Dowty’s engineering works and a large army camp in the middle of the parish began a major change. The engineering works extended, and the army camp became the Central Vehicle Depot of the R.A.O.C. and a vehicle depot of the R.E.M.E.; near-by, substantial housing estates were built in the two decades after the war. In addition the eastward extension of Tewkesbury covered most of the eastern tip of the parish with houses and small factories. By 1966, therefore, the parish had become — partially in terms of area, and predominantly in terms of population — industrial and residential.