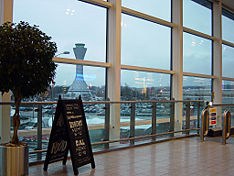 Turnhouse Aerodrome was the most northerly British air defence base in World War I. The small base opened in 1915 and it was used to house the 603 (City of Edinburgh) Squadron, which consisted of DH 9As, Westland Wapitis, Hawker Harts, and Hawker Hind light bombers. All the aircraft used a grass air strip.

In 1918 the Royal Air Force was formed and the airfield was named RAF Turnhouse and ownership transferred to the Ministry of Defence.

When World War II broke out, fighter command took control over the airfield and a runway of 3,900ft was paved to handle the Vickers Supermarine Spitfire.

When the war ended the airfield still remained under military control, but by the late 1940s the first commercial services were launched. In 1947, British European Airways started a service between Edinburgh and London using Vickers Vikings followed by the Viscount and Vanguard series.

In 1952 the runway was extended to 6000ft to handle the Vampire FB5s. In 1956 a new passenger terminal was built to offer improved commercial service and five years later it was extended. The Ministry of Defence transferred ownership to the Ministry of Aviation in 1960 to offer improved commercial service to the airport. In 1971 the British Airports Authority took over the airport and immediately started to expand it by constructing a new runway and terminal building.

Although the original runway 13/31 (which is now 12/30) served the airport well, its alignment had the disadvantage of suffering from severe crosswinds, so movements were transferred to a new runway (07/25, which is has since become 06/24). This runway, completed in 1977 is 8399ft in length, and was able to take all modern airliners. A new terminal was built alongside the runway to cater for the additional traffic. The old terminal and hangars were converted into a cargo centre.

The only international services from Edinburgh during the 1980s were to Amsterdam and Dublin, but in the following years links were opened to destinations in France and Germany. By the end of the decade BAA had been privatised and funds were used to extend the current terminal building and create parking aprons.

An extension to the terminal opened in September 2006. This added six gates on a new pier to the North-East of the earlier building

In the Sh** again, thanks to a certain FS and some idiotic female officer with massive thighs and no brain.
Thank Heavens for the posting system, once again, my faith once again restored Many many thanks to Flt Sgt Brian Balls and Flt Lt Brian Schofield. Remembrances to SAC Danny McDonald MT Flt, RIP, gone but not forgotten