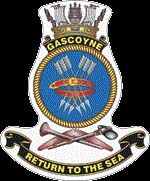 There have been two ships named Gascoyne, named after the river Gascoyne.
The later vessel to recieve the name was a Huon Class Mine Hunter, launched in 2000, and still in service today.
This ship was a River Class frigate, and present in Tokyo Bay on VJ-Day.
She was moved to reserve in 1946, but recommissioned in 1959 for use as a survey and oceanographic ship.
She was finally decommissioned in 1966 and sold for scrap in 1972.