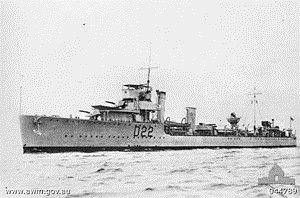 The first HMAS Waterhen was a V and W class destroyer. It was originally HMS Waterhen.
HMS Waterhen (D22/I22) was a W class destroyer laid down by Palmers Shipbuilding and Engineering Company at Jarrow-on-Tyne on 3 July 1917, launched on 23 March 1918, completed on 17 July 1918 and commissioned into the Royal Navy. She was transferred to the Royal Australian Navy at Portsmouth on 11 October 1933 and commissioned as HMAS Waterhen.

Waterhen served in the Mediterranean as part of the famous Scrap Iron Flotilla. She was involved in the evacuation of Greece in April 1941.

HMAS Waterhen was severely damaged during an attack by 12 German and 7 Italian dive bombers off Sollum in North Africa on 29 June 1941. HMS Defender took her in tow but, at 0150 on 30 June 1941, Waterhen rolled over and sank. She was the first ship of the Royal Australian Navy to be lost by enemy action in World War II.