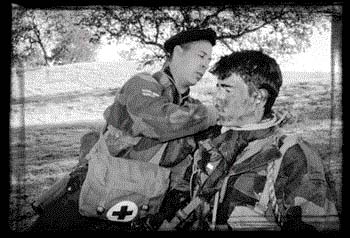 The 16 Parachute Field Ambulance was reformed at Hardwick Hall in April 1942, having drawn volunteers from all areas of the RAMC. Lt-Col Malcolm MacEwan DFC, a 47 year old Royal Flying Corps veteran of the First World War, was selected to command the Ambulance and pull it into shape.
Other elements of the 16 Field Ambulance were soon deployed, with No.1 Section accompanying the 1st Battalion, on the 16th November, to the Souk el Arba plain. The Battalion succeeded in capturing the airstrip and then proceeded towards its next task of persuading the 3,000 strong French garrison at Beja to support the war effort, and then doing all that they could to harass the Germans in the area. Before entering Beja the group stayed overnight at a local village where the Ambulance set up shop in part of a small hospital. Four men were treated on the following day when a Sten gun, a notoriously unpredictable weapon, was unintentionally fired. The French at Beja gave an enthusiastic welcome to the British troops and a temporary twenty-bed hospital was established in a school, but on the following day the French Medical Officer arranged for them to have access to the civil hospital. Elsewhere the 1st Battalion attacks resulted in a small number of casualties that needed to be treated, but by far the biggest test of the medical staff came when German bombers attacked Beja on the 20th November, causing a considerable number of civilian casualties.
Arnhem had cost the 16 Field Ambulance five lives, and the remainder of its personnel were taken prisoner in their entirety. For their role there, the Ambulance was awarded 1 MBE, 1 Military Cross, 2 Distinguished Conduct Medals, 3 Mentioned-in-Despatches, 1 Dutch Bronze Lion, and 2 Dutch Bronze Crosses. In spite of the complete loss of all ranks, the decision was taken to rebuild the Ambulance. When the war ended the 1st Airborne Division was flown to Norway to oversee the surrender of German forces in the country, and on the 10th May the Ambulance flew to Oslo to assist. Following their return the individual elements of the 1st Airborne Division were either disbanded or assigned elsewhere. The 16 Parachute Field Ambulance was disbanded on the 15th November 1945.