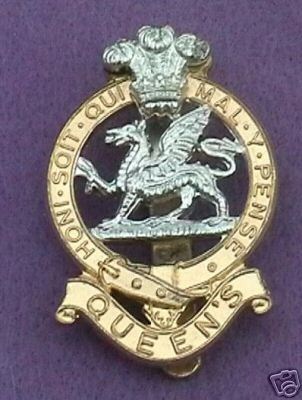 One of these being the  8th (Volunteer) Battalion, The Queen’s Fusiliers (City of London) which officially formed on Albuhera Day, 16th May 1988 with a parade held at St. John’s Hill, Clapham Junction. At this time, the battalion was unique in that although officially part of The Queens Regiment - the 8th Territorial Battalion , it contained rifle companies that were badged either Queen’s Regiment or Royal Regiment of Fusiliers.


As a move to further cement unit identity, a common shoulder title "Queen’s Fusiliers" was issued to all ranks, and an attractive regimental tie was produced. The final step was that a standard stable belt would be worn, and plans to have colours presented were in hand when unfortunately, another review of the Territorial Army was announced. This was the infamous "Options for Change" which lead to the sad loss of The Queen’s Regiment