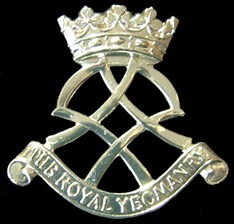 The Royal Yeomanry was formed in 1967, following the amalgamation of five distinguished county yeomanry regiments, as a medium reconnaissance regiment equipped with armoured cars. It continued in this role until 1996, when it became the British Army’s NBC defence regiment. It served exclusively in this role until 1999, when the Joint NBC Regiment was formed. Two of the Royal Yeomanry’s squadrons, A Squadron and the W Squadron, were retained in the NBC role to provide reserves for front line NBC troops. The remaining three converted to the Challenger 2 to serve as reserves for armoured regiments.

Under the restructuring of the Territorial Army announced in March 2006, all five squadrons of the Royal Yeomanry have adopted the role of formation CBRN reconnaissance and the regiment’s established strength has increased to 561 personnel.