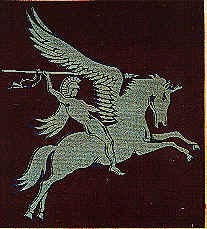 The 1st Parachute Brigade was formed during the Second World War as part of the British Army.
Brigade HQ formed 5 Sep 1941 in the UK. Assigned 1st Airborne Division 10 Dec 1941. Relieved from 1st Airborne Division 22 Sep 1942 and allotted to forces for Invasion of North-West Africa. (One battalion moved by air 10 Nov 1942, pausing at Gibraltar and then landing near Algiers 11 Nov 1942; the remainder of the brigade moved by sea and arrived at Algiers 12 Nov 1942.) The brigade engaged in two battalion-sized drops (late Nov and early Dec 1942), then served as infantry for the remainder of the campaign in Tunisia, remaining in action until 15 Apr 1943.

Assigned 1st Airborne Division 7 May 1943, which was then concentrating in Tunisia. The brigade was dropped in Sicily the evening of 13 Jul 1943 to capture Primosole Bridge. They were relieved 15 Jul 1943 and then returned to Tunisia. The brigade sailed with its division to Taranto, arriving 9 Sep 1943. It then left for the UK in Nov 1943.

The brigade next went into action 17 Sep 1944 when dropped into Arnhem during Operation Market Garden. One battalion was able to seize the northern end of the Rhine bridge, but was then isolated and later overrun. The remainder of the brigade was in a pocket with 1st Airborne Division until the remnants were withdrawn the night of 24/25 Sep 1944. This largely destroyed the brigade, which absorbed remnants of 4th Parachute Brigade and was reconstituted Nov 1944 in the UK. Relieved from 1st Airborne Division 5 May 1945 and then posted to Denmark at the end of the war. Brigade lapsed when the brigade commander left for new assignment and units posted away 19 Jul 1945. 1st Parachute Brigade reformed 30 Jul 1945. Assigned 1st Airborne Division 25 Aug 1945.

i was with 16 ind para brigade we jumped on the dawn,there was a dusk drop as well as i recall about 7 paras died some from 15 para ta scots. me and aguy called monty co,s driver.went over to heavy drop to pick up our land rover i saw a jeep land on its side,and watched as another one nearly landed on top of a farm house. also i could see parachutes hanging in trees in the distanse, it was in the local paper called the kiel cannel disaster.my mother was given a phone no. to check if i was ok