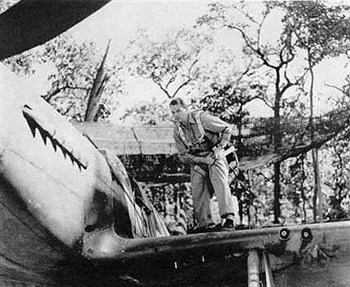 During the Quebec Conference in August 1943, President Franklin D. Roosevelt was impressed by Brigadier Orde Wingate’s account of what could be done in Burma with proper air support. To comply with Roosevelt’s proposed air support for British long range penetration operations in Burma, the USAAF created the 5318th Air Unit that was redesignated "Provisional Composite No. 1 Air Commandos" and tasked with supporting the Chindits. Eventually they were designated the 1st Air Commando Group in March 1944 by General Hap Arnold.

The commander of the Air Commandos was Colonel Philip Cochran (1910-1979), a model for a main character named "Flip Corkin" in the Terry and the Pirates (comic strip).

The group consisted of C-47 air transports, Waco CG 4A military gliders, a squadron of P-51 Mustangs, a squadron of B-25H bombers, and L-1 and L-5 Sentinel liaison aircraft. All of the planes were marked with five diagonal white stripes at the back end of the fuselage. The group also tested the United States’ first use of a helicopter in combat, the Sikorsky R-4, in May of 1944.

The Chindits were delighted to hear they had their own private air force. John Masters’ Chindit memoirs The Road Past Mandalay stated that the Chindits’ relationship with the Royal Air Force was problematic saying "Whatever we asked them to do they declared to be difficult, impossible or against Air Force policy. Whatever they offered to do, we didn’t need"

Cochran earned the Chindits’ respect by agreeing to letting them call in air support themselves and evacuating a Chindit injured in a training accident by landing an L-5 in a field 400 feet long when 600 feet was the minimum.

Later in the campaign under the designation of the 1st Air Commando Force, they supported other units of the British Fourteenth Army during their victorious drive to Rangoon. One of the glider pilots who participated in landing the Chindits was actor Jackie Coogan.

After a glider training accident, the Commander of the Chindits General Orde Wingate sent the 1st Air Commando a message:

"Please be assured that we will go with your boys, any place, any time, any where."
It was adopted by the 1st Air Commando as their motto, and in an abbreviated form this is still used as the motto of the USAF Special Operations Command.