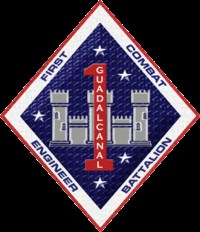 1st Combat Engineer Battalion is a combat engineer battalion of the United States Marine Corps. The unit, nicknamed "The Super Breed", is based at Marine Corps Base Camp Pendleton, California and falls under the command of the 1st Marine Division and the I Marine Expeditionary Force.

World War II
The battalion was formed on February 24, 1941 at Guantanamo Bay, Cuba, as the 1st Engineer Battalion, 1st Marine Division. They relocated during April 1941 to Parris Island, South Carolina and again in September 1941 to New River, North Carolina

In June 1942 the battalion deployed to Wellington, New Zealand. They were redesignated on January 12, 1943 as the 1st Battalion, 17th Marines and again on June 30, 1944 as the First Engineer Battalion

The battalion participated in combat during the Battle of Guadalcanal, Eastern New Guinea, Battle of New Britain, Battle of Peleliu and the Battle of Okinawa. Following the war they were sent to Tientsin, China in September 1945 as peacekeepers and returned to the United States during June 1947 to Camp Pendleton, California


Korean War
The battalion deployed during August 1950 to Kobe, Japan, joining the 1st Provisional Marine Brigade they were then sent in September 1950 to Inchon, Korea, and joined the 1st Marine Division.

During the war they participated in the following battles:

Battle of Pusan Perimeter
Battle of Inchon-Seoul
Battle of Chosin Reservoir
East-Central Front
Western Front
Following the armistice the battalion participated in the defense of the Korean Demilitarized Zone from August 1953 – April 1955. They returned to Camp Pendleton, California in April 1955 and were again redesignated on May 1, 1957 as the 1st Pioneer Battalion.


Vietnam War
The battalion was again redesignated on May 1, 1963 as the 1st Engineer Battalion and redeployed during September 1965 to Camp Hansen, Okinawa. They remained there until January 1966 when they moved to Chu Lai in the Republic of Vietnam.

During the Vietnam War they participated in combat operation from January 1966 through April 1971, operating from Chu Lai and Da Nang.

Global War on Terror
The battalion has participated in Operation Iraqi Freedom from March 2003 until the present.