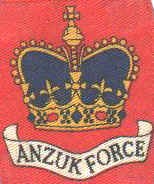 ANZUK Force may not have been very large, but it was a complex organization and underwent quite a few changes in its brief history. The idea of ANZUK Force came from the politicians and the diplomats. The British had maintained a presence in Singapore and Malaya for many years, and with the coming of the Japanese during the Second World War they were joined by Australian troops. After the world war another more protracted war began—this time against the communist terrorists—and British, Australian, and New Zealand servicemen joined together to fight the CTs in the jungle.

At this time Britain was committed to provide defence assistance to Malaysia and Singapore under the Anglo-Malayan Defence Agreement of 1957 with which Australia and New Zealand were associated. As the insurgency and the "confrontation" between Indonesia and the newly formed Malaysian State tapered off it was obvious that Britain would reduce the numbers of troops stationed here. The British Parliamentary Labour Party began talking about cuts in 1966, then, in July 1967, the Labour Government announced substantial reductions. Of the 80,000 men and women working for and in the services east of Suez in 1967 only 40,000 uniformed and civilian men and women were to remain after 1970/71.

This decision was not really surprising, but what did shock people was the announcement in January 1968 that Britain would withdraw completely by 1971. This immediately posed the familiar question "What will happen when the British go?" The first tentative steps towards finding an answer were taken by the politicians and diplomats at a Five Power (Singapore, Malaysia, Australia, New Zealand and the UK) Conference in Kuala Lumpur in June 1968 at which the Malaysian Prime Minister proposed that control and maintenance of the British bases become a joint Five Power responsibility after 1971. Although this suggestion came to nothing the British Conservative Party eventually decided to oppose the Labour policy of withdrawal, and Mr Heath began talking about a "new and equal partnership, between five Commonwealth governments".

In 1970, during "Exercise Bersatu Padu", an election occurred in Britain which returned the Conservative Party to power. This led to a series of meetings which resulted in an announcement on 16 February 1971 that Australian, New Zealand and British troops would remain in Singapore and Malaysia under an Australian commander of "two star" rank.

This was the 3 power 28 ANZUK Brigade which started in 1969 thereby preceding ANZUK Force. It grew out of the remains of the old 5 power 28th (Independent) Commonwealth Infantry Brigade Group. 1 RAR was the first Australian Battalion to serve with ANZUK.

The era during which Britain assumed prime responsibility for the defence of Malaysia and Singapore was fast coming to an end. AMDA was to be replaced by the Five Power Defence Arrangements under which Singapore and Malaysia were acknowledged to be responsible for their own defence, and Australia, New Zealand and the U.K. agreed that "In the event of any form of armed attack externally organised or supported, or the threat of such an attack against Malaysia or Singapore the Governments would immediately consult together for the purpose of deciding what measures should be taken jointly or separately in relation to such attack or threat".

Singapore. 1972-03. The Royal Pennant tops the flags of the three nations of the ANZUK Force, as Queen Elizabeth and Prince Philip review a parade of the ANZUK Force during their one-day visit to Singapore. Slouch-hatted Diggers from the 6th Battalion, The Royal Australian Regiment (6RAR), are pictured being inspected by the Royal couple.

ANZUK Force was primarily 7,500 personnel from the three services of three nations serving in Singapore, Malaysia, and on the high seas. The Force was supported by about 4,750 locally employed civilians.

ANZUK was not large compared with the peak of the British presence in the area of about 70,000 service personnel and civilians. On the other hand our job was somewhat different. Stripped of diplomatic jargon ANZUK’s main task was simply to be there. It was not to fight the CTs, nor was it likely that we would be called on to fight any one else. Our governments and the governments of Singapore and Malaysia considered that simply by being here we would forestall the possibility of anyone upsetting the political and military balance in the Malay Peninsula.

This would help the governments of Singapore and Malaysia to get on with the job of developing their economies, and building up their armed forces. Another task was to work with the Singaporean and Malaysian Armed Forces to help them to improve their expertise, but this was not their main role.

An aspect of ANZUK which many people found difficult to understand was the fact that it is not an international
organisation, like NATO, to which governments belong. ANZUK was merely a shorthand name for the forces of Australia, New Zealand and the U.K. which, for the sake of convenience, our three governments had decided to place under the one commander, and to support through an integrated, tri-national logistics organisation.


When ANZUK officially came into being on 1 November 1971 the first Force Commander, Rear Admiral David Wells, RAN, had under command the following major units:

two RN frigates,
RAN and RNZN frigates and an
RN or RAN submarine.


Air Force: Unlike the other two services the air force was mainly concentrated in Malaysia at Butterworth where Nos. 3 and 75 Squadrons RAAF (Mirages) and some RAAF Dakotas were based.
A flight of Mirages was regularly deployed to Tengah from Butterworth. Also at Tengah were
RAF Shackletons (soon to be replaced by Nimrods)
Whirlwind (later Wessex) helicopters of 103 Squadron RAF and Bristol freighters and Iroquois helicopters of 41 Squadron RNZAF.


ANZUK Support Group: This formation comprised 24 integrated units providing all Army logistic support requirements, and common support for all other services in Singapore. Two ANZUK Bases were located at Woodlands and Sembawang to cater for the support requirements of these areas.
Force Units: The main Force unit was
9 ANZUK Signal Regiment which provided internal and external military communications.
ATMA, the ANZUK Traffic Management Agency,
the ANZUK Intelligence and Security Unit, and
65 Ground Liaison Section were also Force units.

The hallmark of ANZUK was integration. The only major units which were not integrated were the three infantry battalions. 9 ANZUK Signal Regiment was undoubtedly the most integrated unit with men and women from the nine ANZUK services, Singaporean and Malaysian servicemen, and civilians in its employ.

ANZUK Force could not have existed without its large civilian component. In Singapore we employed one civilian for every two servicemen and at Butterworth the ratio was almost one for one. Most of the civilians were locally employed Singaporeans and Malaysians doing a multitude of jobs ranging from the Installations Auxiliary Police Force and technicians to clerks, typists, drivers, mess staff and gardeners.