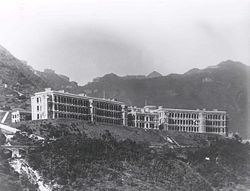 Often referred to simply as the Bowen Road Hospital, the first generation hospital was a 150 bed hospital constructed of red brick. It consisted of two blocks, each of 3 storeys, configured with wards and a central administrative block and had commanding views of the harbour.

During the Japanese occupation, a portion of the Hospital was used for the care of prisoners of war. It continued in use until 1967, when it was turned over to the colonial government. The facility was moved to a site in Kowloon.

Between 1967 and 1972, it became the temporary location for the new Island School, which had obtained a 5-year lease from the Government. The east wing is now home to the (Jewish International) Carmel School, and the Canadian International School occupied the west wing of the building from 1994 to 1999, when the Canadian school moved to new premises in Aberdeen.

Former hospital buildings on the adjacent site on Borrett Road, vacated in 1969, were used by the Chinese International School during the 1980s. 10 Borlett Road became the first home to the West Island School, from 1991 to 1994, and is being used by the Island School.

In the 1986 Mid Levels Plan, the site was zoned to become open space. In May 2001, the Town Planning Board re-zoned it to "government, community and institutional use" on the recommendation of the Planning Department and the Antiquities and Monuments Office, allowing the buildings to be preserved

In 1967, a new 15-storey British Military Hospital was opened in the King’s Park area, on a site to the east of the Queen Elizabeth Hospital, to replace the Bowen Road Hospital. It used to provide medical treatment for servicemen and their dependents, and returning soldiers from Vietnam.

When the British armed forces suffered a 15% reduction between 1975 and 1978, the Government proposed to use the hospital as an overspill for the Queen Elizabeth Hospital, which was in undercapacity. It would buy bedspace and treatment from the Hospital, but the high cost was criticised as lacking in transparency, and unreasonably high.

Within the Joint Liaison Group, there was a consensus to demolish it. It was officially closed on June 30, 1996 as the British Garrison scaled down from more than 10,000 personnel to about 3,000 due to the approach of 1997