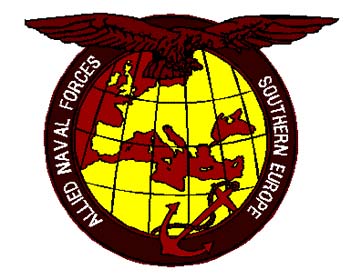 Allied Naval Forces Southern Europe is one of the two Component Commands in Allied Command Europe’s Southern Region. The NAVSOUTH Commander, also known as COMNAVSOUTH, is responsible for sea control, protection of the sea lines of communication, and naval control of shipping in the Mediterranean and the Black Seas.


NAVSOUTH was established as a separate headquarterson June 5, 1967, upon dissolution of Headquarters Allied Forces Mediterranean, a major NATO Subordinate Command previously responsible for maritime operations in the Mediterranean and Black Seas. It is situated on the Island of Nisida, Naples, Italy. COMNAVSOUTH is an Italian three-star admiral with an international staff provided mainly by Germany, Greece, Italy, the Netherlands, Spain, Turkey, the United Kingdom and the United States.

Except during exercises and the current operations in the Adriatic, the only forces permanently under COMNAVSOUTH’s control are the NATO Standing Naval Force Mediterranean and the NATO Mine Counter Measures Force South (MCMFORSOUTH) . In addition, COMNAVSOUTH coordinates, on a 24-hour daily basis, surveillance of his area of responsibility.

From July 1992 to October 1996, COMNAVSOUTH has commanded the joint Western European Union (WEU)/NATO maritime operation known as Sharp Guard in support of United Nations Resolutions regarding the former Yugoslavia. NAVSOUTH has continued to provide maritime forces in support of NATO operations in the Balkans.